This topic has come up a couple of times in the past week or so. Especially because I would agree with anyone who says we need to see more men like this in the media; it needs to be pointed out more publicly and widely that nail polish and make-up daddies (or, heck, non-parents, too!) are totally cool, and that their masculinity is not so delicate as to be annihilated through this “feminine” act. Especially when it’s for the love of their daughters or granddaughters. (Okay, for simplicity’s sake, I am going to just use “daddies” instead of both “daddies and granddaddies.”)

Now, I think a new criterion needs to be set for all husbands/potential fathers: That they be willing to be nail-polish and make-up daddies (and/or husbands – but let’s focus for now)

I expect all fathers  to sit there patiently as their itty bitty daughters (or sons – trust NO one who tells you nail polish/make-up is only for girls) do their manicures and pedicures,  the way Kashmala, my now five-year-old niece, does my dad. Or at least how she cleans his nails and pretends my dad’s at her salon, and my dad just sits there smiling and trying hard not to laugh as she goes, “k, wEn a minute, Baba, I’ll brb. Don’t move!” And, for the record, my dad also plays dolls with her, enthusiastically and willingly letting her push him out of his bed so she can put her dolls to sleep there. She also gets mad when he doesn’t remember her dolls’ names.

It’s the most adorable thing ever, and any father-like figure who denies this moment of bliss to a little girl is no daddy in my eyes. And, yes, this includes his not being shy walking in the public with it, no matter how much other men might be staring and judging. (I suspect women might go “Awwww, that’s so cute!” though, ya? No? k.) A man who’ll put conventional social notions of masculinity above his daughter is no man to begin with. I’m trying to imagine how this conversation would go if daddy were to say no to her request to play dolls or make-up with her. Imagine the daughter inviting her dad to play dolls or make-up with her. How would he respond if he believes it’s a feminine thing to do (and we all know feminine things always translate to inferior things), that such quality time with his daughter would deprive him of his masculinity? “Sweetie, men don’t do make-up or play dolls”? Well, knowing kids, who are born with a keen sense of curiosity that we rip off of them as they grow older, I imagine the little girl asking, “Why?” (In case you haven’t noticed, if you’re around kids a lot, they always ask “why” when you tell them something. This question needs to become the leading question of everyone’s lives.) “Because that’s for girls only.”
– “Why?”
– “Because people think it’s funny when a man wears make-up or plays dolls.”
– “Why?”
– “Because that’s only for women.”
– “Why?”

I’d love to watch this conversation take place between a little girl and her daughter as he foolishly and lamely attempts to explain to her why fathers can’t play dolls or make-up with the most important creatures in their lives. This question of “why” should make us adults think as well. What kind of a misguided society tells a father that he’s not a man if he cannot proudly walk around in public with nail polish on that his daughter put on him when they were last playing? How weak and cowardly does a man have to be to say no to his daughter as she gathers her feminine toys and asks her father to play with her?

But there’s happy news: There do exist men out there, in real life, who either already do this or would do it. I know of someone who goes to work with nail polish on that his daughter put on him. There’s also that beautiful photo from Humans of New York–shown on right– where a man is wearing blue nail polish on and is not at all embarrassed to show it. (The comments on the photo make a person’s heart smile! Seee, men?! No one’s going to mock you if you do it! And if they do, you’re not the problem; the problem is our incomplete understanding of masculinity and femininity, which are subjective notions in the first place.)

My daughter’s eyes went wide. She was sold on the idea. This could happen. But then she turned and looked at me, “But what are you going to be?” She thought for a second and said “Well, if I’m a Han Solo, you should probably be Princess Leia, I guess…” She looked at me with an implied question in her eyes. And, c’mon, if I immediately told her “YES, a girl can be Han Solo,” it would’ve been pretty hypocritical of me to say “Nope, a boy can’t be Princess Leia.” So, as quickly as I could, I said, “That would be FANTASTIC. I totally should be Leia.”

And that’s exactly what I did. Because that’s what dads do. 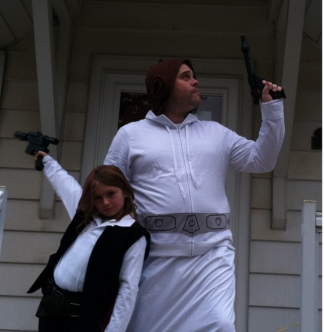 So a piece of unsolicited advice to all (heterosexual) females: If the man you want to marry is disgusted by the idea of doing the above for the love of his daughter, re-think your interest in him. He clearly loves society more than he’ll ever love your kids (or even you: he obviously thinks something’s wrong with being “feminine,” don’t you see?).

Categories: Death to patriarchy, family, feminism, forbidden things, gender, I can't believe this needs to be said out loud, love, society, why we need feminism, your face is haraam