Hijab-policing on the internet: images about how to wear the hijab “correctly”

I’ve come across so many funny images/messages on the hijab that I figured I should start compiling them and share them on the blog. I hope you enjoy them at least as much as I do!

DISCLAIMER: I am not against the hijab and I am not against any hijabis. In fact, I fully support the hijab as well as those who wear it. But I am against the objectification of the hijabi, as can be seen in too many of the images below; I’m against the sexualization of the woman (the human!) through the hijab; I’m against the many assumptions that are made about the Muslim female who does not cover her head, whether per her own volition or someone/something else’s–the hijab doesn’t define anyone; a person’s character does. Beliefs say nothing about us, and they mean nothing; it is our behavior, our personality, our character–everything that is “us” besides the piece of cloth that is on our head. After all, do most Muslims not agree that the hijab is more than just the head-covering? If that’s really true, then why the following images? Why the judgments against anyone who doesn’t wear the hijab? Why the comparison of the non-hijabi female to a lolly pop (wow – just wow) and that of the hijabi to a “pearl” (again, wow!)? Or the chicken metaphor (see below). And, dude! Men (or women) telling us “how” to wear the hijab or what’s hijab and what’s not? What the hellz? Who put YOU in charge, my dear “outwardly pious” brother (or sister) in Islam? And, by the way, to those patriarchal folks fighting for “men’s rights,” know that you’re actually insulting men by telling women to cover their head so as not to test men’s “sexual urges” & stop insulting women by objectifying them through the hijab. The human male is NOT a rapist or molester by default or by nature; he grows up as one, and our ideas that “women whose hair is covered are better and more self-respecting than those whose hair is not covered; the one with the head-covering on doesn’t want to be raped and doesn’t want negative attention, but the one without it OBVIOUSLY does” are crucial to their (men’s) growing up as rapists or potential rapists/molesters. These messages don’t help anyone but rapists.

It is tragic to realize that we live in a society that teaches women how NOT to get raped instead of teaching men NOT to rape. For more on this, see my post “The Hijab as a Solution to Rape?”

And then there’s this gem: 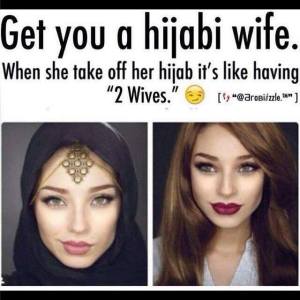