I almost feel bad for writing this because I think Pakistan’s choice to expel Afghan refugees out of the area is merely a clever tactic to divert people’s attention from the real problem facing Pakistan – militancy and what just happened in Peshawar. It thinks (and it looks like it’s right) that we are a stupid, mindless breed of people and will fall for their lie that our problems exist because of the Afghan refugees we’re not even hospitable to. And so everyone’s going to talk about this and falsely connect militancy and violence to Afghans and Afghan refugees especially and therefore not talk about the real problem facing Pakistan and Khyber Pakhtunkhwa. So by talking about it, I feel like I’m letting them succeed.

So, yeah, as of recent news from Pakistan: Pakistan has decided to kick out *all Afghan refugees* from the Khyber Pakhtunkhwa province (that’s Pashtun, by the way, like most of the Afghan refugees there) within the next thirty days because. Because the Peshawar school attack. If you’re missing a connection here, it’s because none exist. Let’s get this straight: Pakistan wants to get rid of Afghan refugees in response to the December 16 Peshawar Attack … because, in case it’s not already obvious, Pakistan’s problem exists because Afghan refugees. And all other things Afghanistan-related. Why are our leaders so devoid of  sense? Why do they keep making such stupid decisions? Our problems don’t exist because of Afghan refugees! These refugees have nothing to do with terrorism except that their being refugees is a a direct result of Pakistan’s creation of Taliban (and the CIA helped created the Taliban, too; we’ll talk on that some other time, though). I don’t understand how much sense this is supposed to make. You create a monster because of whom people are forced to leave their homes, and then you claim that the people who left because of the monster you accused are the actual problem. When the actual problem is actually you. 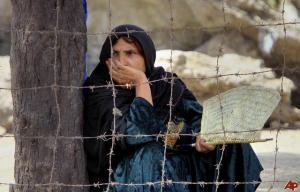 Because most refugees anywhere are women and children and are taken most advantage of in any society. P.S. Random google image of Afghan refugees

But! Understand that there’s no connection between militancy and the poor Afghan refugees that haven’t even been able to create a decent living in Pakistan. I mean, c’mon – Pakistan can’t even provide for its own citizens lets alone others. That’s not to say Pakistan has no room for refugees. On the contrary: because poverty is so endemic to the country, it might as well let people in if they (the refugees) feel safer there even if in reality, they’re actually not. Pakistan–and especially Khyber Pakhtunkhwa right now–is making it seem like it’s been providing for the refugees, giving them resources and love and time and opportunities. This is all BS. More than most of the money Pakistan receives to help refugees goes into the hands of our corrupt leaders, politicians, and whoever else that’s supposed to be providing for the refugees. This is a known secret all across Pakistan. Anyone doubtful can look up information on the life of the 1.5+ million Afghan refugees in Pakistan online (not always reliable, though) or talk to actual refugees to get the reality. Sure, some of them are nice people and appreciate being able to at least feel safer in Pakistan than they might in their home in Afghanistan, but they’d probably feel that way anywhere in the world, not just in Pakistan. The abuse (sexual, physical) that they face, the humiliation that comes with being a refugee or just an unwanted guest/resident somewhere new even if you think the people are your own (Pukhtuns) and should therefore be welcoming you more), harassment by corrupt police (see, also, this – a UN Refugee Agency report on Afghan refugees in Pakistan and Iran) and law officials, … are common stories. The Human Rights Watch also has some good information on some of the major issues that Afghan refugees deal with on a daily basis.

Anyway, so I haven’t been taking this news of getting rid of Afghan refugees in Khyber Pakhtunkhwa (KPK) well at all. There are several reasons: refugees, already doing poorly wherever they are cursed to be, are being forced to pay for a crime they had no role in committing (Pakistan created and nurtured the Taliban, and now it’s taking it on the people whom it destroyed in the process?!); this decision is absolutely inhumane–and I don’t care if this is all “emotional” or whatever (there’s nothing wrong with being emotional anyway; what’s wrong with the world is that it is not emotional at all); KPK is Pashtun, and it’s hurting its very own … what a cowardly leadership, KPK. You fail.

But perhaps most importantly of all, for the last few months, I’ve been working with Afghan refugees in my city (there’s starting to be a strong population of them), and it’s been a wonderful experience. Hearing their terrifying stories of what they’ve endured as refugees wherever they were before they made it here has been painful. I can only imagine what those who remain in insufferable conditions wherever they are must have gone through and must continue to go through. God give them strength to bear life as hell on earth, aameen.

Don’t get me wrong. I get politics and I get that there’s no room for empathy, sincerity, and respect for unprivileged humans in politics. The only people politics has always and will always protect are those with a whole bunch of money and networks with “important” people.

Pakistan is a hopeless country, as are many other countries around the world and especially in South Asia and the Middle East. Its problems are too grand and too deep to be solved with the expulsion of poor people from. It’s not going to magically become a safe country for everyone all of a sudden.

Random google image of Afghan refugees. P.S. This is how they live, and Pakistan wants to think it’s doing them a favor …

What’s saddest, too, is that Afghans, including Pukhtuns, in Afghanistan have been so incredibly sympathetic towards the Peshawar attack victims and their families (and who’d understand the pain of these families better than Afghans), and this is how we get respond to their sympathies and love. When have we–the Pukhtuns of Pakhtunkhwa–ever, ever stood up for Pukhtuns of Afghanistan for them to be standing up for us in our time of need?

Why do some governments, incompetent that they are, keep feeling the need to just *respond* to something even if it’s an unreasonable, illogical, and cruel response? The point isn’t to just do something – the point is to do the right thing, which is to stop terrorism! These refugees are not our problem. Our problem is religious extremism forced down our throats by those whose own children are enjoying an elite education in the West and living luxurious lives wherever they are!

Suck it, Pakhtunkhwa. You disappoint me, and you fail your own people.

Categories: Afghans, human rights, I can't believe this needs to be said out loud, migration, Pakistan, Pashtuns, social justice, violence in this world