Continuing our series on Pashtun women’s experiences with social media / what it’s like being a Pashtun woman on good ol’ internet. (The other stories are linked at the bottom of this post. PLEASE read the Introduction to the series so you understand why I choose to focus on Pashtuns and not on other people. No, harassment and intimidation have no race, I know that.) Note that one of the following ladies’ harassers has been identified and his Facebook is linked; another of her harassers, a Hamza Jahed, is also linked with his Facebook – and a quick visit to Hamza’s FB page proves the man’s hypocrisy: he’s got pictures of the Qur’an with Allah’s name here and there! I believe in naming and shaming to death all men like this.

Most of the insult and indecent messages that I have received are in Pashto. And all of them are from men. My family and my husband have not been spared in these insults. The recent insult I got was from a man called Taviz Gul Hasrat [the link is to his Facebook profile] who claimed to study in Nangarhar University. I left a comment on a friend’s post the same sex marriage bill passing in the US. In the comment ‘I supported equality in marriage in the US and asked instead of criticizing other societies we should eradicate Bachabazi in Afghanistan which rotten the values of Afghan society.’ Mr Tavis started giving me lectures and morals and values with lots of insults. I forgot the exact wordings because our common friend deleted mine and his comments. He wrote in Pashto:

[Note from Orbala: The above translates roughly to:
Taviz Gul: “The war in Afghanistan will never end because of the cowardice of people like your family who let their womenfolk sleep around! You cowardly slut!”
Our friend: “Afghanistan will achieve peace only once humans start thinking critically and logically instead of attacking people’s characters and slandering/abusing them.”]

I didn’t want to continue discussion with someone who has no logic. He responded in English saying that while my husband is sleeping with other man I should use a fuck machine to satisfy myself. And so on and so forth… Not only on social matters but on political matters I have become a target by some men who try to impose their morals and values on me and other women on social media. On Afghan Election Day, I posted a photo of mine on my page, posed as HI 5. As you may know the number ‘5’ was Ashraf Ghani’s camp number and I was and am his big fan. As a journalist I couldn’t reveal my support to his camp. And I just posted that pic with ‘Hi 5’ the pic attracted hundreds of comment among them was lots of insult comments in Dari, Pashto and English. I couldn’t recall the exact sentences but what I could never forget those harsh comments which hurt me a lot: “one man cannot satisfy you, you want five men….” One common thing in all Afghan/Pashtun men comments for Pashtun/ afghan women is that all of them think here in the West any types of sexual acts and mind can imagine, we do them in open, in public, with no shame or guilt, as they are all OK in the eyes of law. And women day and night are busy with these kinds of acts. 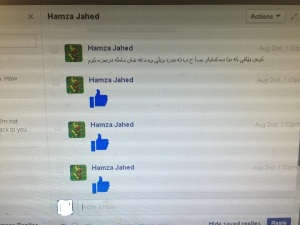 Our Message to Her

It breaks my heart to see you and other inspiring Pukhtun women (or anyone, any woman, inspiring or not) are treated in this manner. It really cannot be emphasized enough: We do not ask for disrespect, harassment, mistreatment, and other negative attention just because we are showing our faces or are interacting with the public; this abusive response to the public appearance of Pukhtun women is another reason that we need more Pukhtun women in such fields! So thank you, Friend, for your courage, for your perseverance, and for your work. It is especially fields like journalism and other media-related disciplines that demand Pukhtun women’s presence and contributions. You’re doing precisely that, and for that, we should be grateful, not ashamed. God bless you and your work, and God keep you, aamen.

Previously on What It’s Like Being a Pashtun Woman on the Internet:
– Introduction to the Series
– Story 1: intimidation, indecent photos, and threats of no-husband-for-you
– Story 2: indecent exposures, demands for massages, and male orders to be quiet
– Story 3: on public identity, marriage proposals, unwanted requests

Categories: Death to patriarchy, gender, I can't believe this needs to be said out loud, Just stop, Pashtun Leaders, Pashtuns, social justice, stop using the word shame, why we need feminism, your face is haraam