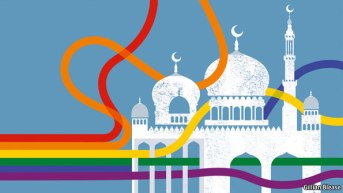 Like everyone else, I’m thinking about the mass shooting at the Orlando club, and I can’t put any words together. There’s hurt, there’s anger, there’s confusion – I will never understand, and I hope I never understand, why and how anyone can take another person’s life, let alone the lives of over 50 people. May God grant them all eternal Peace, may God be their Companion, aameen. For their families and friends and other loved ones, I can’t … I can’t think of what consoling words to share with them. I’m heartbroken that they have lost people they loved. I wish them strength and peace as they cope with these unbearable losses. God be with them, too, aameen.

There are several major issues that are deeply connected to this massacre. I wish I had the time to go into a lot of detail about each one, but I want to at least introduce them here. Maybe I’ll discuss them each in more detail another time, inshaAllah.

Categories: being human, Books, Death to patriarchy, human rights, I can't believe this needs to be said out loud, let's talk privilege, social justice, violence in this world