Okay, so, basically, a “mosque” in Massachusetts, very ironically called Masjid al-Rahma, decided that they won’t let women do the Eid prayer tomorrow because of limited space. So they’ll only accommodate men, the default human species. People picked up on it and condemned it, and so the Comfort Inn where they were gonna pray canceled on them.

Don’t miss the highlighted part … where they said that they won’t let women in due to little space.

I laughed out loud at the irony here. The name of the masjid. Rahma literally means mercy; it comes from the root word for “womb.” (I will never get over the fact that one of God’s names, Rahman/Rahim, means womb.) This mosque – a place that’s supposed to be a sanctuary for everyone and especially for the marginalized, the oppressed, the ignored, the despised – excluded the wombs that bore its administration from worship, from God’s home, because they didn’t have enough space.

There’s not a mosque I know of in the U.S. that can accommodate everyone during Eid (and some even for Friday) prayers. Most of them don’t go around denying women access to the mosque on such special occasions. They either offer multiple prayers (the ADAMS center in Virginia does 4 Friday prayers! Most mosques I’ve attended offer 2 Eid prayers.), or people who come late miss out. Or something else. But it’s not to be bigoted.

I’ll refer to this mosque as Bait al-Dhulm instead of masjid al-rahma (dhulm/ ظُلْم = oppression, tyranny, darkness; bait = house) because physically hurts me to use the word mosque here. And I’ll shorten it to Al-Dhulm. Were the mosque truly a space of mercy, I’d be using al-rahma.

Anyway, so Muslim women expressed their disapproval on the bait’s FB page. Al-Dhulm then posted the following: 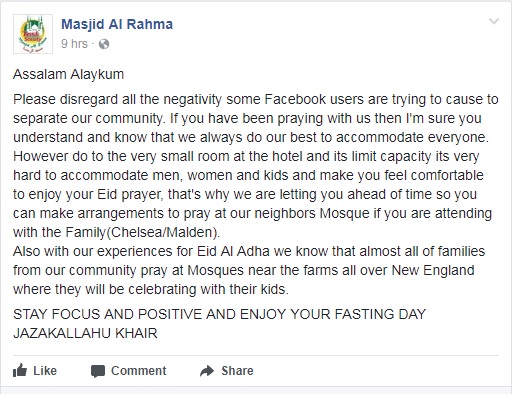 There’s so much to unpack here, like how those expressing their concerns are dismissed as the ones being “negative” when it’s clearly al-dhulm that’s in the wrong here. And then we’re patronized even further by being told to ‘stay focused and positive and enjoy” our Eid. I never know whether to laugh or cry when our concerns are treated this way. How are we to enjoy and “stay positive” when there’s so much against us? The disrespect here is just numbing.

I also like how the whole thing is presented as if it all makes sense. You know, like when you don’t have enough space to do a prayer, just block the women to accommodate the men. Gosh, do women take up a lotta space or what.

Never mind that they could simply have said first come, firs serve because space is very limited. See, since the space is very limited, there will also be many, many men who will be left out. If you notify people in advance that there’s less space and to be prepared for that, at least families could worship together – kinda like, you know, how Eid is intended to be celebrated? Then again, what do I know. I’m just a Muslim woman criticizing a “mosque.”

But here’s the good news:

A Muslim woman contacted Comfort Inn, where the prayer was to take place, explaining why this was a problem, and they cancelled the whole prayer for everyone. Maybe now they’ll understand what it’s like to not have any space to go to for prayer.

But note how they’re telling the story. A woman “threatened” to cause problems for them. I like how patriarchy projects its actions, its injustice onto those challenging it. It’s not like the “mosque” did anything wrong at all – they were just being reasonable and fair to men; how does female exclusion from prayer not make sense? – it’s those who called them out and took action because the “mosque” administration refused to acknowledge they were committing a wrong.

Let this sink in, Muslims. This “mosque” would rather have not have a prayer at all than to allow women to participate. If this does not disturb you, you’re part of the problem.

Also, funny story – the media contacted FITNA (Feminist Islamic Troublemakers of North America) about this whole thing. Which is funny because this is what the bait al- dhulm was trying to prevent. Hopefully they learned their lesson to never do something like this again and instead just be just to everyone.

(Most) Muslims agree that Eid is a time for the community to celebrate together. This community aspect of Eid is so important to Islam that some authoritative opinions say that even if the moon has not been sighted for Eid, you celebrate with the community if they’re celebrating. This makes sense to me, and this is the opinion I follow. But yet, here’s a mosque pretending like Eid is just for men. Well, it’s not.

on Muslim misogyny and the threat of Islamophobia (someone should write a book on this, but here’s something I wrote on it way back when)

A friend and I were talking about this exclusion issue, and she expressed the concern that Islamophobes will love this story. I have this fear, too. It’s something that many Muslim feminists think and talk about all the time. There’s not enough spaces for us to internally critique the patriarchy and misogyny in our communities that is, and one of the main reasons  is that, on the one hand, such conversations are prone to being picked up by Islamophobes who think our struggles as women (and esp as feminists) only validate their attacks on Islam and Muslims; on the other hand, most Muslim spaces don’t tolerate critical perspectives–either because there’s no problems and the patriarchy is either good (?!?!) or it’s all in our heads (or, like in the words of a white male academic, a convert to Islam, at least there’s no widow-burning in Islam! Or we should be grateful that Islam banned female infanticide, and such as!), or then we need to shush because no need to air our dirty laundry because Islamophobia will pick up on it and we’ll all look bad.

And this is what keeps so many of us quiet.

But you know what? The silence accomplishes nothing. Even when Muslim organizations and mosques promise to be better when we quietly and privately approach them about our concerns, they forget about it once we stop speaking up. The only thing that’s really ever worked, at least by starting a conversation and bringing attention to an issue, is demanding public accountability. Like in this case.

When the Qur’an says in 4:135 to stand up firmly for justice, be it against ourselves and our parents or nearest kin, that includes our own communities that disrespect us, dehumanize us, reject us, exclude us from worship.

I hope Muslims who support the exclusion of women and even dare to justify it using Islam (“but men are obligated to do the prayer, and women are supposed to pray at home” – because ain’t no patriarchy there at all) learn something from all of this.

I’m grateful to the person who called the Comfort Inn and let them know what was wrong here. Thank you, K ❤ May God reward you for standing up for justice.