Why aren’t more people watching One Day at a Time?

My latest TV obsession is One Day at a Time, a sitcom about a Cuban-American family. (Not to be confused with the 1970s show with the same name.) It’s a Netflix original, and I keep reading that not enough people are watching it so it’s gonna be canceled – and it’s the best show ever, so I literally can’t even. I need more seasons.

As literally the best show in the history of tv, One Day At a Time cannot afford to be canceled. Can y’all please start watching it already? The third season just came out on Feb. 8th, and there may not be any future ones. 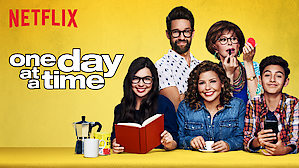 This is such an important show. It covers important relevant issues like immigration, deportation, misogyny, homophobia (and they use updated language/vocabulary to talk about gender issues!), single motherhood, drug/alcohol addiction, racism/white supremacy. And every episode has a scene, a moment, that makes you pause. There’s only one episode where I wasn’t moved in  that moment (it was an earlier epie in the 3rd season), but in all the other epies, I am moved to tears, chills down my spine and everything. The show is powerful, beautiful, hilarious.

And one of my personal most favorite parts about it is that the daughters have healthy relationships with their mothers. Ever noticed that daughters in almost all tv shows hate their mothers because the mothers are controlling or nitpicky or terribly annoying, annoying not in the normal way but the kind where the daughter is like ugh I don’t wanna see her face or ever visit her? Yeah, I got tired of shows like that (Friends, Crazy Ex Girlfriend, etc.), and I asked friends for suggestions for tv shows where daughters and mothers have more healthy relationships. Most people recommended Jane the Virgin, which I also LOVE! Ahhh, Jane!! Such a fantastic show. But too much drama so may not be for everyone. It’s like … it’s straight out of a #telenovela (the narrator is a gem!). And then I accidentally came across One Day at a Time, and it, like, changed my life.

Okay, please watch the show ❤ You won’t regret. No one who’s tried it has been like “na, not my type.”