Muslims and Islam in the Republic of Georgia (Batoumi and Khulo)

I haven’t blogged in a long while, and I miss it. I am hoping to regain the energy to blog actively again because, God, how I miss it. While I work on producing more actual content, here’s some stuff on my travels last summer. This one specifically on the Republic of Georgia. I’ll talk about Berlin and Prague another time, inshaAllah. Memorable times there, too.

I went to Georgia (the country) on a school trip, and I fell in love with the place and its people. We went via Istanbul so stopped by there for a couple of days. (I have been to Turkey twice and both times had a miserable experience. The first time was so bad I like to pretend it never happened. That’s okay – sad stuff happens. I’ll give it a try when I’m ready again, inshaAllah.)

So Georgia. I learned so much it was overwhelming. I know that when you go some place new, you should always have some background information on it, and I had some in the case of Georgia, but honestly, much of what I was looking for – Islam and Muslims in Georgia – was a challenge to find online. I relied on my contacts at my institution who have been there before many times. So I knew, for example, that in Tbilisi, the capital of Georgia, there was just one mosque for some 100,000 Muslims, and while they’re mostly Sunni, the Sunnis and the Shias have to share one. Speaking of which, this funny thing happened when I was walking around in Tbilisi and was around the mosque when I came across a group of tourists being guided by what sounded like a not very informed tour guide. The tour guide tells everyone: “The Muslims in Georgia are very tolerant of each other, and they get along so well they even share this mosque here. They told the government they don’t want another mosque because they like worshiping together here. This is the only mosque in the world where Sunnis and Shias pray together. You’ll never find anything like it anywhere else.” Lots of lies here – first, no, not the only mosque in the world where Shias and Sunnis pray together, but ok. Second, the Sunnis and Shias aren’t “happy” this way: they have no other choice! They have been begging the government for more mosques, but the government simply doesn’t let them build more mosques.

Everything I’m sharing here is from my own observations and my conversations with the Muslims there. My primary person of contact there was a former mufti, a scholar, from Batoumi. He runs a Muslim organization there. He’s still a respected mufti, but he no longer works with the Georgian government because he wasn’t comfortable with the unethical demands the government was making so he quit.

Batoumi is a port city and has a large Muslim population. It’s in a region called Adjara, historically Muslim, converted during Ottoman rule (it was part of the Ottoman Empire, too). Multiple Muslims told me that the population of Muslims there has been in decline in recent decades because the government is actively forcibly converting Muslims to Christianity. Georgia is a Georgian Orthodox Christian country, and the government doesn’t really recognize anyone other than an orthodox Christian as a legit religious person – there’s a small Baptist population, for example, who are struggling, too.

Over the last century, the country was under Soviet rule, during which the ban on religion was so bad, no religion respected or tolerated, that the oldest person I spoke with, probably in her 70s at least, said, when I asked her what she feels about the decline of Islam in the region, that “when I was growing up, we had to pray with the windows and the doors shut and couldn’t display any symbol of faith. So I’m just happy we don’t have to do that anymore!” Ever since the Soviet fall in the 90s, Georgia has successfully converted some 200,000 Muslims to Christianity. The families I was staying with and talking to told me that this has meant families and relatives have turned against each other AND – what I found most striking and sad – in the same immediate family, you can find Muslims and Christians, the younger generation being Christian and the older generation being Muslim. I didn’t get to meet any such families, but my visits to mosque certainly did suggest this may be true: I almost never saw young people in mosques in Batoumi. One of the families I stayed with had teenage children who did go to the mosque with their parents, though. Those kids were the primary translators for me, though I also mostly spoke Arabic with the mufti (longest I’ve had to use my Arabic outside of an Arab country! It was precious!).

Batoumi is a major port city, very beautiful. I was told that most families in Batoumi also have summer homes in the mountains/villages. My primary host family had one house in Batoumi and one in a village in the mountains – gorgeous! Absolutely breathtaking mountains, mashaAllah – called Khulo. The weather was fantastic in Khulo, such a peaceful environment it felt like a peace retreat the whole time.

Nino and Ali from a distance

I had a fantastic time in Batoumi. One of the most touristy things to do there is to see the classic Ali and Nino statue. This is a moving statue of a couple from an iconic love story about an Azerbaijani Muslim boy named Ali and a Georgian Christian girl named Nino in the early 1900s. The novel was written by Kurban Said (pseudonym) in the 1930s. The statue was created by Tamara Kvesitadze in 2010. So the statues of the two lovers move around the whole time, at one point meeting, literally merging into each other to become one but then again separating. And the cycle of temptation and separation continues.

That moment when they merge into one at last! 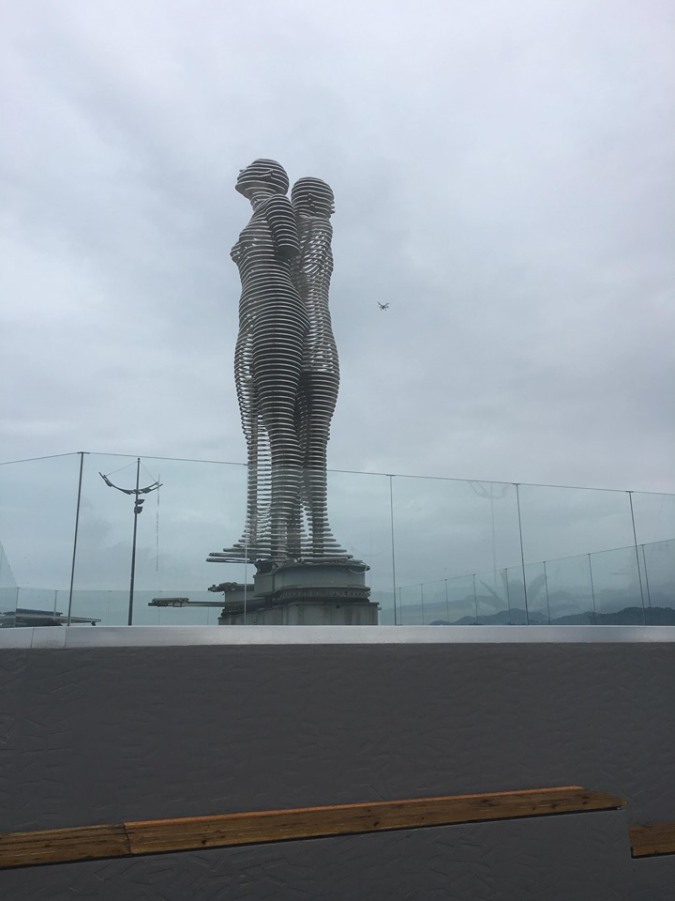 And getting farther and farther …

There are two mosques in Batoumi. One that everyone was calling the old one, another the new one. The old one was built in the 1800s by the Ottomans (in a very traditionally Ottoman style, too) and is a traditional mosque with minarets and everything, very beautiful and large inside.  The women’s area is upstairs. The new one is very recently and doesn’t “feel” like a traditional mosque.  But then again, I was in the women’s area, so I don’t know how the “actual” mosque must be like. (This reminds me of my mosque experience at al-Azhar. Ugh. Terrible. Just terrible. #DeathToPatriarchy) I saw only older women here, no young people at all. It seemed like many people preferred this new mosque. My host father led the prayers here when in town, I believe, and I went to an iftar here. A very generous iftar, available to all. I was told that Turkey sends the iftar over for free! (Turkey is like literally right there, so.)

Women’s area of the new mosque

The women’s area of the new mosque 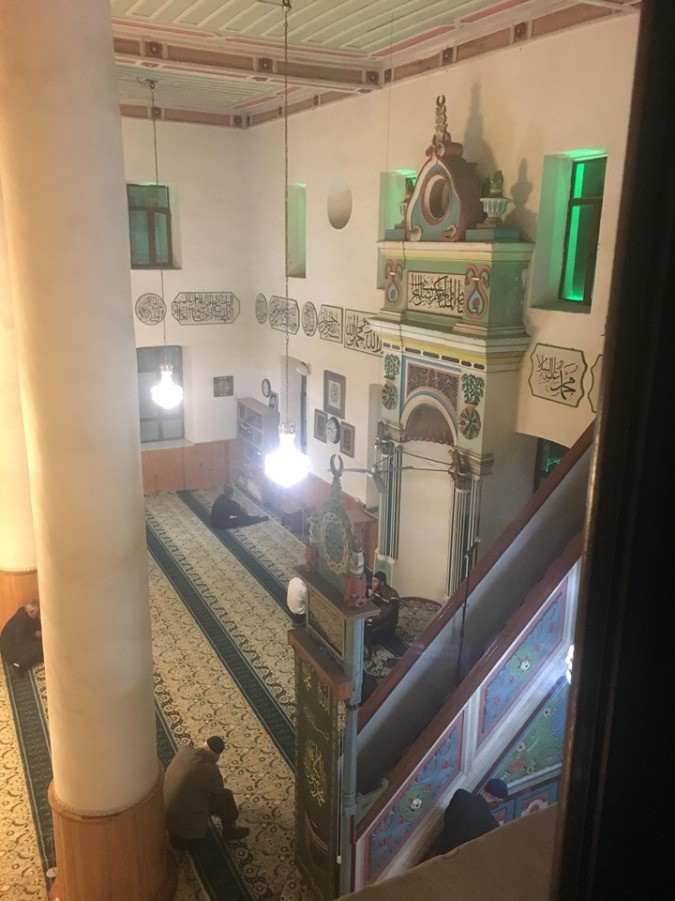 The men’s area – but I took this from upstairs, where the women’s area is

I’ve to look through some more pics to find the pics from the women’s side of the old mosque. It wasn’t bad, but I wasn’t impressed, either. (Always judge a mosque – if you’re Muslim – by its women’s area. Always.)

I took this from a moving car. But a cross on the road to Khulo.

The roads to Khulo weren’t great, so the drive there was a rocky and scary and very long one, even though Khulo isn’t that far from Batoumi, just ~55 miles / 88 km. The population of Khulo is at least 99% Muslim, and they’re hoping it’ll stay that way for at least a while. And yet, as you’re driving through this village, somehow, just somehow, you manage to find crosses all over. I asked my host/driver about this and he said, yep, this is one of the things the government is doing to make Muslims feel like they don’t belong. It gives visitors the wrong impression, too, that this is a Christian area when it’s not.

I have a ton of videos of our drive to Khulo and also some videos from Batoumi and Tbilisi, but I’ll have to dig through some folders to find them and will share them another time.

On our way to Khulo 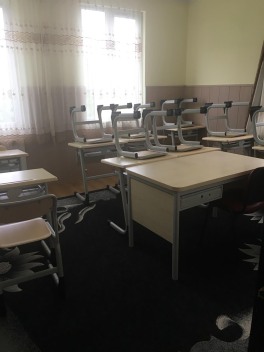 In an effort to curb the conversion rates, the Muslim community built some schools for the Muslim youth to keep them there in summers. I visited the madrasahs, equipped with dorms and classrooms and everything. Unfortunately, the government had them shut these schools down because, apparently, teaching religion to folks under 18 is “indoctrination” and that’s not allowed. Except, it’s allowed for Christians, just not for the Muslims. The schools were shut down while I was there.

And newly closed, too, because there was still writing on the board and one classroom was like this: 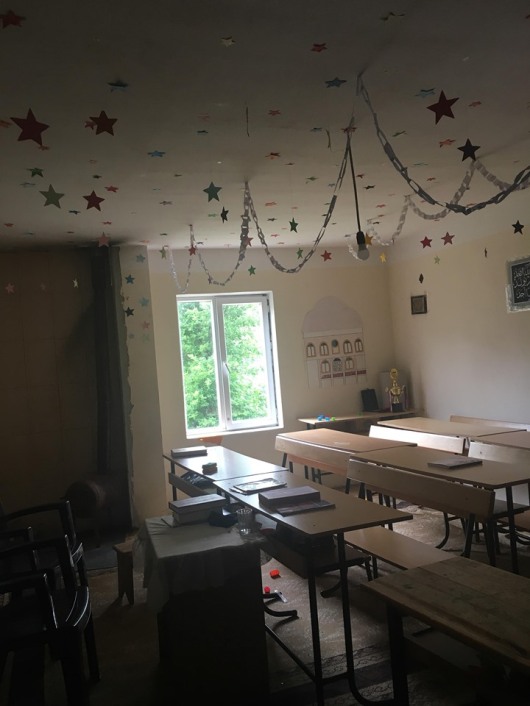 A classroom in the madrasa 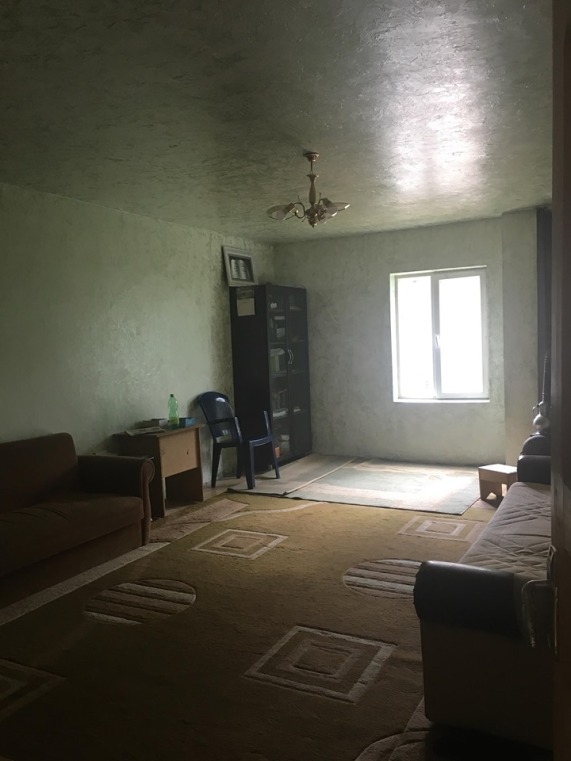 A lounge in the madrasa

They had an English woman teaching English here

So I arrive in Khulo, right, and the scenery just took my breath away. It was so beautiful. So peaceful. I was also fed so well.

The mosque in Khulo was nice, too. Women don’t go there on Fridays where supposedly it gets very packed with men, but there’s a women’s area upstairs here as well. It wasn’t bad. 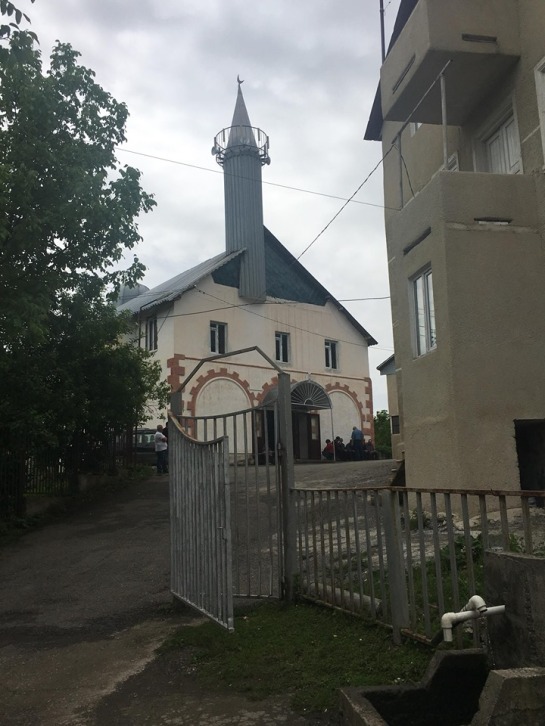 Entrance of the mosque

I’ll do another post on Tbilisi alone if I can remember – and talk in it about anything else I forgot to mention here. I went to an interfaith iftar there, with nearly all university students. In Tbilisi, there are also many places to get  a Turkish bath or a Sulfur bath, and I highly recommend it. If you’re budgeting, there are reasonable and unreasonable options. My personal favorite one was one right next to the mosque (historically, these public baths (baths available to the public for a fee)  aka hamaams would be in the same vicinity as a mosque to make sure that people were clean before special prayers like Friday). Parts of Tbilisi feel very much like a Muslim town, the architecture, the aura.