This is inspired by the All-Male Panels Tumblr, which, according to the blog, documents “all male panels, seminars, events, and various other things featuring all male experts.” I urge everyone to take a look at it every now and then because it’s a breathtakingly hilarious and brilliant take on the patriarchy of male-dominated and “all-male nonsense,” to quote Kecia Ali’s article on the matter.

So, given the troubling trend of male-dominated/all-male events/conferences (see here and here, for instance), some Muslim female friends and I have been discussing the need for some space where we can document the same thing as on the above Tumblr but exclusively for Muslims. If someone wants to volunteer to create a blog for this initiative, please do; it’d be greatly appreciated! I’d do it, but I can barely manage this current blog of mine 🙂 Otherwise, I’m happy to accept whatever others find and want to share so we can post them on this page.

If you have an issue with the following and think that we need to understand the “reasons” behind why women are excluded (because it’s a well-intentioned approach, probably), you are missing the whole point. It’s about representation, about fairness, about recognition of women as scholars and leaders and authorities. It’s not just a problem facing Muslims, obviously, as the Tumblr linked above makes it clear. It’s a universally patriarchal problem. There’s absolutely no legitimate reason for having no women speakers/contributors when having a whole bunch of men; for illegitimate and unreasonable and probably false reasons, see the image on left. If the issue is that these women are unavailable, don’t have time or interest in attending, etc., you’re telling me that the organizers made a concerted effort to contact the endless number of women scholars/leaders out there, and none of them were willing to attend. This is more than unlikely.

Before we get to the collection, let me link here some of the Muslim women who have worked and are still working to correct this problem, at the very least by recognizing it and openly condemning it.

Now for the collection of male-only/all-male nonsense.

This is what I’ve got so far and would love to add more as I come across them.

(Note: The captions are on the top of each image, not below it.)

So I randomly googled “Islam events speakers,” and this page was the first result:

For the below two images: An all-male conference on the Islamic educational system. Because women obviously have nothing useful to say on education, the madrasah system, and Islam. Or maybe we do and it’s mainly critical stuff, and these men won’t have that. Then again, what do I know; I’m just a woman. (Remember: I contacted the organizer for this conference, and he said to me that this exclusion was entirely his fault, that he’d been asked to include women but chose not to. He didn’t say why.) 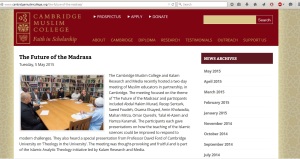 13 bearded and blue men (not brothers), 3 faceless and pink women (2 of them sisters). Here, you can read about what happened when several Muslim women condemned this. In summary, the organizer got really defensive and angry and deleted the page with our comments where we were pointing the harms of this image and of this exclusion and lack of fair representation of Muslim women scholars. He later told me in a message that he deleted our comments because we had nothing substantial to say.

The following three images: A bunch of men talking about empowering women – but no need to include women speakers while doing so. So empowering. The images are from a Facebook Event page promoting an Empowerment Women event. Note, in the top posters, that the speakers are all male in the poster. The image below the posters is a disappointed response from Muslim women commenting on the lack of women speakers at a women’s empowerment event; fortunately, the organizer (a male) responded to acknowledge that, saying they’d “overlooked” it.

Women not welcome at Knowledge Retreats – being dangerously sexy and naturally seductive and all, we’d probably just distract these knowledge seekers who want some quiet and peace while learning and disseminating their patriarchal nonsense amongst themselves.

Let these righteous brothers/”famous scholars” guide you, one all-male panel at a time. 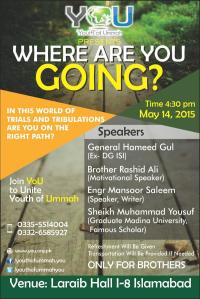 Living the Legacy of the Prophet (peace be upon him) … men only, though (click here for their Facebook event; please contact them and tell them this is unacceptable):

Come learn all about justice in Islam – from this all-male panel:

Rejuvenate, revitalize, reinvigorate. With this all-male session at ICNA.

I wouldn’t wanna miss this annual Iftar with this all-male panel:

The poster below advertises the conference as “not a typical conference,” but that’s laughable because all-male conferences are anything but atypical.

All-Male Islam (our teachers and scholars and stuff)

Another all-male panel on Islam. On Peace TV. 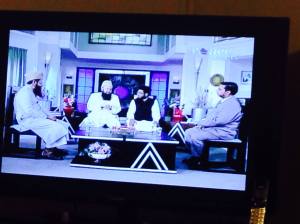 ISB Atlanta’s way of celebrating diversity – by excluding women (of any religion) but including men of multiple. #interfaithbeforeintrafaith

The advisers and scholars of the Islamic Speakers Bureau of Atlanta (basically, they’re all male leaders from a variety of religions): http://www.isbatlanta.org/ifsb

– ICNA’s list of speakers includes 5 women, 28 men. #applause
– This website‘s favorite Muslim speakers are all men.
– Speaking of all-male/male-only leadership: The 18-page letter of condemnation to Baghdadi/ISIS is signed by (at least) 126 Muslim scholars, all of them men. And Sunni. (I actually read every single signature on there.)
– Brother Junaid Ibn Amjad of Muslim Matters finds no woman worthy of inclusion in his “Top Ten Islamic Lectures” list – heck,  women aren’t even included in the “Runner-ups”! #whatsourlife
– Even Wikipedia can’t recognize more than a handful of women scholars of Islam from the last century, or “modern-Day Muslim scholars of Islam”! Farhat Hashmi, Ingrid Mattson, and Intisar Rabb are the only ones I see – from all regions. But you bet they didn’t leave out even one of the Muslim male scholars, not even the non-traditionalist ones.
– 4 of the 17 faculty members of Zaytuna College, the first Muslim college in the U.S., are female; 1 out of their 9 board of trustees is female.

– This article by Kecia Ali (“Men, Men Everywhere”) is fantastic, and the following is quoted from it verbatim:

A study of modern Muslim intellectuals with a chapter on women, law, and society, that names only three women, none of them Muslim as far as I can tell, in an index which names 240 individuals?

Two books about Blackamerican Muslim thought and identity that do not mention Amina Wadud, the African-American Muslim thinker who has had the most significant global impact?

A book about Muslim reform that names only four Muslim women, all from Muhammad’s seventh-century community, and all but one from his household, in the main body of the work? Which segregates every book by a Muslim woman into one lengthy endnote, and says nothing about them or their authors anywhere else?